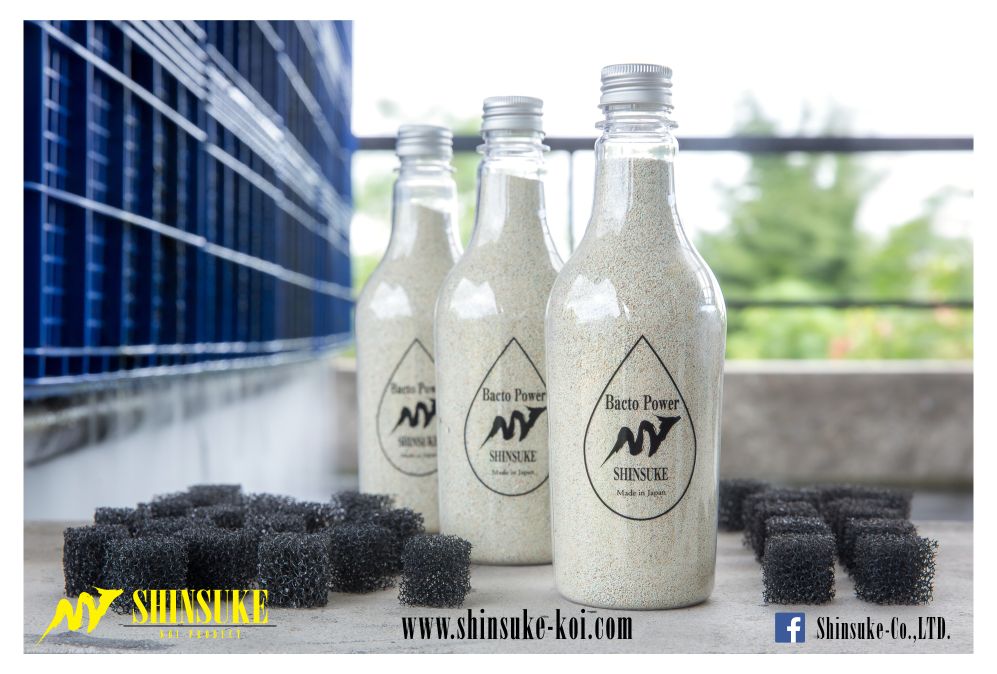 Then, we are talking about nitrite evolution of growth inhibition 2nd chapter as follows.
We have received inquiry with ammonia we talked about on 1st chapter, so we are getting on this subject in respond to the inquiry.

Question : From where does ammonia evolve ?
It is quite simple enough question received from highschool student.
We have covered the subject over and over but, go over this then again.

Organic substances ⇒ Protein⇒Amino acid⇒Ammonia⇒Nitrite⇒Nitrate
Please be sure to appreciate above flow as the schema will be shown in our website once in a while.

Organic substances
We assume that tainted pond water is nothing but the feed left-over or excrement of nishikigoi and that is widely known conceipt.
As a matter of fact, there is more to it than that. For example, dead phytoplankton, zooplankton, dryed up algae, microbiotics (including bacteria), furthermore, mucous of nishikigoi should be taken into account.

As far as carbonhydrate and fat are concerned, it does not matter because those will not discharge ammonia when they are decomposed.
Instead those are just broken down into H2O and CO2.
On the other hand, protein would be the problem because it discharges ammonia in the process of being decomposed by acteria or hydrolysis.

Only the bacteria can decompose ammonia and there is no other way to control ammonia.
Then, ammonia turns into nitrite in the process of being decomposed.

2. Nitrite evolution
Organic substances ⇒Protein ⇒Amino acid⇒Ammonia⇒Nitrite⇒Nitrate
In the process of above flow, if the bacteria which decomposes ammonia and transforms into nitrite (Nitrosomonas) and the bacteria which likewise transforms nitrite into nitrate (Nitrobacter) do not have optimum living space (filtration materials), it ended up in ammonia and nitrite concentration increasing because those bacteria are not able to work as they should to fully decompose ammonia and bacteria.

Nirtrite is quite hazardous for fish equally as ammonia.
Ideal nitrite concentration are known to be less than 0.1mg per litre.
In case that concentration exceeds this level, there would be symptoms such as respiration difficulty, eyes becoming cloudy, swimming difficulty, lying down at the bottom of the pond shown on nishikigoi.

Under such circumstances, nishikigoi is likely to get sick and would die in the worst case.
As mentioned as above, nitrite evolution can be the cause of growth inhibition and have negative impact on skin which leads into getting complexion worse.

In order to prevent those condition from happening, what should be done is to make food chain available in filtration tank in a nutshell.
Heterotrophic bacteria which breaks organic substances down into protein, into amino acid and into ammonia.
Digesting bacteria (Nitrosomonas) which breaks ammonia into nitrite.

Digesting bacteria (Nitrobacter) which breaks nitrite into nitrate,,
Other than those, facultative anaerobic bacteria which breaks nitrate into nitrogen gas.
All of those heterotrophic bacteria, digesting bacteria, facultative anaerobic bacteria are compounded with Bacto Power.
Please give it a try to use Bacto Power so that you can see the difference being made with your own eyes.

Mineral Plus
Scroll to top